Home >About Us >Management 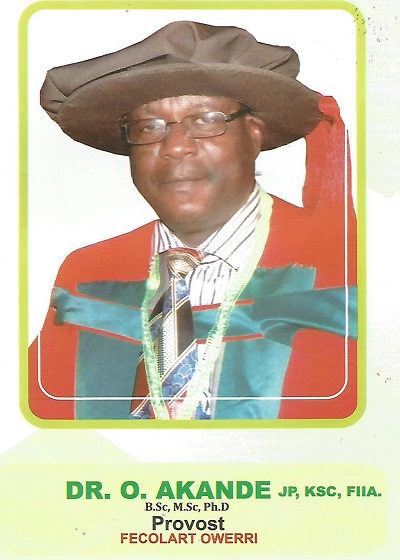 Provost/CEO.
Sir, Dr. Oluyemi Akande JP. is a calm and calculated personality and a lover of qualitative education; He was born on the 10th of October 1963 to the family of Mr. Lamidi Akande Gbadamosi of Ile Aduloju, Oke-Offa Baba Isale, Ibadan.
He obtained his First School Leaving Certificate in 1974 at St. Andrew Primary School, Idi-oro, Ibadan, WAEC (O/L – 1983) at Araromi Community High School, Atan-Ota, Ogun State and WAEC (A/L – 1985) at School of Basic Studies, Ijebu Ode, Ogun State. After this, he proceeded to the University of Ibadan where he graduated from the Department of Geography in 1988. He has worked in various capacities in the private sectors and served as a teacher in the Ogun State Teaching Service Commission.
Having obtained his M.Sc in Geography and Planning with Special Option in Remote Sensing and Geographic Information System-GIS) from University of Lagos in 1992, he joined the Federal Civil Service as Senior Land Resources Officer where he rose to the position of Deputy Director in the Public Service. Within this period, the paraphernalia of office did not deter Dr. Akande from pursuing his cherished academic desires. He obtained his Ph.D degree in Environmental Management from the University of Nigeria Nsukka in 2012.
He has travelled far and wide for various leadership training courses in Israel, Kenya, Ghana, United Kingdom etc and there are no states in Nigeria he has not travelled to either for seminars, conferences and field works. He has published several papers in journals and conferences proceedings.
He was appointed the Substantive Provost/CEO of Federal College of Land Resources Technology, Owerri in May 7, 2015. Dr. Akande is notorious for constantly admonishing anyone close to him to “upgrade themselves” which is his subtle way of encouraging the younger ones to further their education. Under his watch, a lot of developmental projects have been attracted to the college and has uplifted so many people who came across him.
He is happily married to Lady Stella Ndidi Akande and they are blessed with beautiful children namely: Kemi, Abidemi, Olayemi and Olushola. He is a Knight of St. Christopher of Anglican Communion. 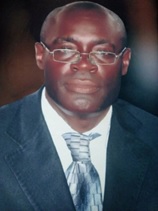 He obtained his West African School Certificate Grade 1 at Community Secondary School, Umunumo, Ehime Mbano L.G.A in 1980. He then proceeded to the Federal University of Technology, Owerri and bagged B.Eng.Hons (Second Class Upper Division) in Agric. Engineering Technology in 1989 and capped it with a Master’s degree in Resources Engineering from the University of Karlsruhe, Germany in 2000.

Donatus Okwudiri Igbojionu has served the college in several capacities where he made tremendous contributions that impacted positively on its development:

Donatus Okwudiri Igbojionu had brief stints at Registrar’s Department of Union Bank of Nig. PLC and won the bank’s undergraduate scholarship for 1985-1989.

Donatus Okwudiri Igbojionu has to his credit over 10 quality publications and has attended over 15 local and international conferences and workshops.

He is a member of various professional bodies among which are:

Donatus Okwudiri Igbojionu as a DAAD scholar from 1998-2000 has visited Germany, France, Belgium, Denmark and Austria.

He has served the Academic Staff Union of Colleges of Agriculture (ASUCA) as Branch Chairman FECOLART, Owerri from 2008 – 2017. He was also Secretary of his Town Union from 1994 – 1996.

He is married to Deaconess Juliet Nnennya Igbojionu and the marriage is blessed with a boy and two girls.